Say what you mean and see if anyone picks up on it.

Now the boat is talking – telling us its name? Can you believe it? And can you believe someone named a boat The Pout? Believe it. 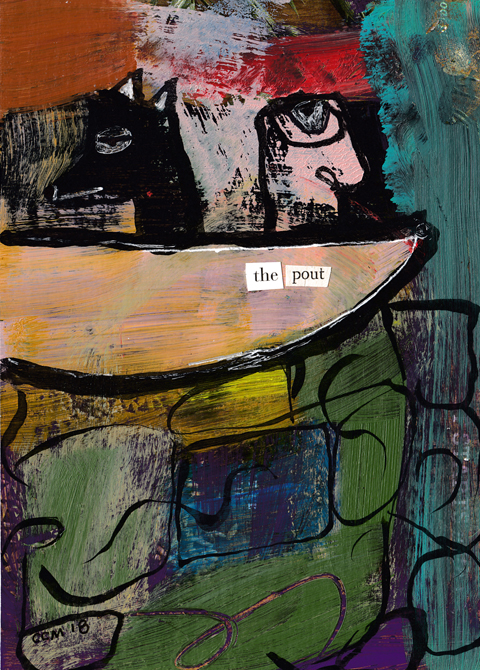 Not quite gibberish. In fact, it is starting to make a lot of sense, now that I think about it.

You may be on to something. 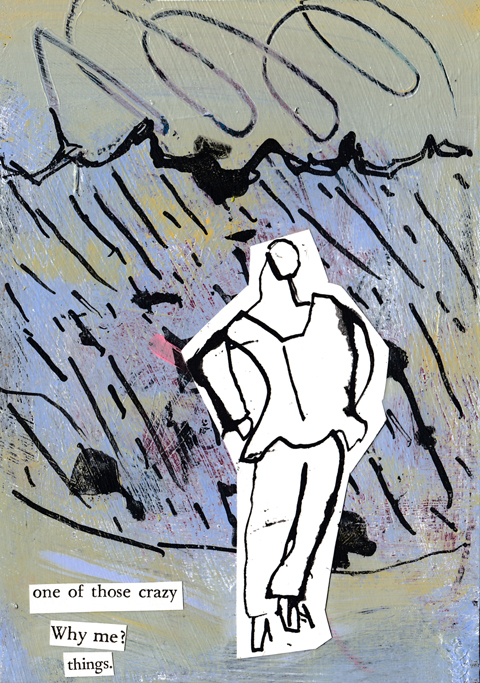 Talking, but who is listening? 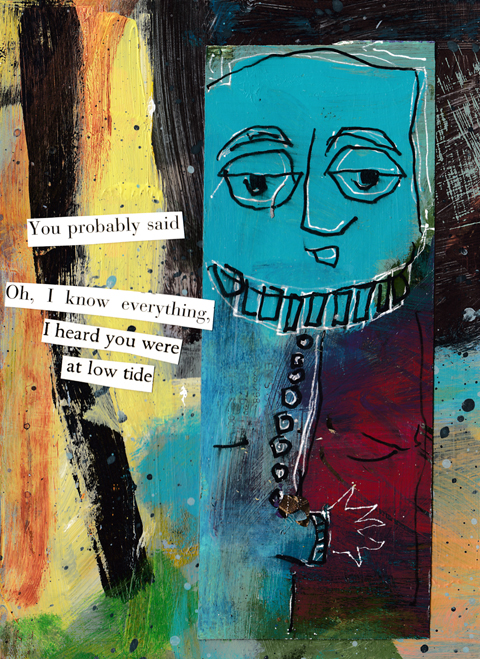 You’ve seen the published stories and their illustrations in the September Slam at Fictive Dream, an online magazine focusing on the short story.  Now, in a series of posts, I travel through the project from my perspective as an artist, covering the creative process, physical and mental – from the tools I used to the way I approached the various stories.

For other posts in this series, search under the term “September Slam”.

The next story I worked on in the series was “Dear Damien”, by Dave Wakely. Fictive Dream Editor Laura Black sent me the two versions of the story, unmarked and marked, and we both chose the same sections as illustration material. To me, the story was about relationships, how they grow and how they are cultivated over time. The characters are loving and not afraid to show it. I wanted to depict these feelings and the challenge for me was that I had to figure out a way to make emotions visible.

The first drawing I worked on came from the beginning of the story.  George, the writer, introduces the premise of the story – saying to Damien:

…I write to you now that you’ve left home, ready to start University…

I decided to illustrate the writer in the act of writing. I used a quiet mostly blue background to emphasize the nature of the writing process. I drew on my own house, my imagination, and some photos of objects I’ve taken as part of my visual inventory to make this illustration. 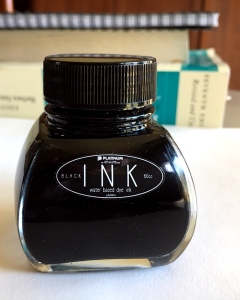 Once the drawing was done, I scanned it, as I did all the drawings. Let me take a quick aside to describe this process. My scanner only handles items approximately the size of an 8 1/2″ x 11″ sheet, so I scanned the drawing in two pieces: 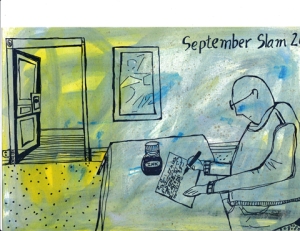 I then combined them in PhotoShop Elements 15, using the Guided Menu, Photomerge selection, then Panorama, then Reposition. Click, and the pieces are magically turned into one image, which I cropped, flattened, and saved.

I have been scanning and merging images for decades using various PhotoShop versions, and doing it manually is tedious and difficult. This feature made it possible for me to give Laura good images every time.

Once done, I had the final image of George sitting at a desk, writing. I wanted to depict the quiet, the thoughtfulness, and the emotion of a person communicating with another on paper; in a letter, there is time to reflect and choose words. I felt that this story epitomized the nature of letter-writing at its best. 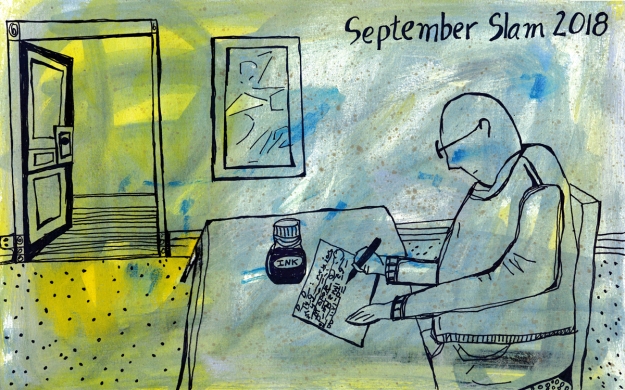 Notice that the “September Slam” is in a non-safe-zone position – this illustration was done before we discovered the need to keep text more centrally located.

The next drawing, the one Laura chose,  featured the two men and the boy at the moment they met:

And then you thrust forward your hand and shook first mine and then Frank’s. Except you didn’t let go of his.

I chose a pre-painted paper in pink and yellow colors because it was light, gentle, and reminded me of a garden. I did some preliminary sketches of how the three people should be positioned. Once I came up with that, I filled in the rest of the illustration around them, from my imagination and from various garden and house photos I had in my image inventory. 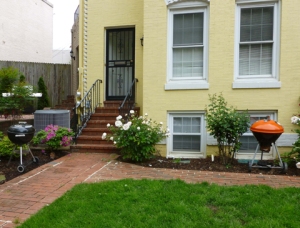 The garden was particularly important to me – I felt it symbolized not only the growth of the relationship and its cultivation but also the fact that plants and people die and yet live on in the lives and memories of others.

A garden not only gives you fresh herbs and vegetables: it teaches you patience. Even if the only thing you plant for the next few years are kisses, don’t expect a harvest overnight. Everything valuable in this world needs time, care and attention, so learn how to provide them: if you find love, nurture it.

Here is the illustration I ended up with (as it appeared with “September Slam” in its original position):

and as it appeared in final form:

Here’s what Laura Black said about her thought process in choosing the image for the story:

Either of your images would have worked very well with Dear Damian. It’s a gentle and charming story and I thought both images charming also.

There was no reason not to use the image of the older man imparting his years of wisdom in a letter. None at all. I chose, however, the image of George, Frank and Damian as a young boy because, by the final paragraph, they have all grown in significance. Without Frank, George’s experiences and perhaps his scope of wisdom would have been different. Without Damian knocking on their door he wouldn’t have had the memory he describes. And Damian would not have become a friend in later years.

The final paragraph is the point at which the characters connect and your image reflects this. At this moment all three are happy, the garden is lovely and as you said yourself, it’s about the cultivation of relationships.

So that is how this story received its illustration. If you haven’t read it, take a look: Dear Damian, by Dave Wakely.

Claudia McGill and Her Art World
Blog at WordPress.com.